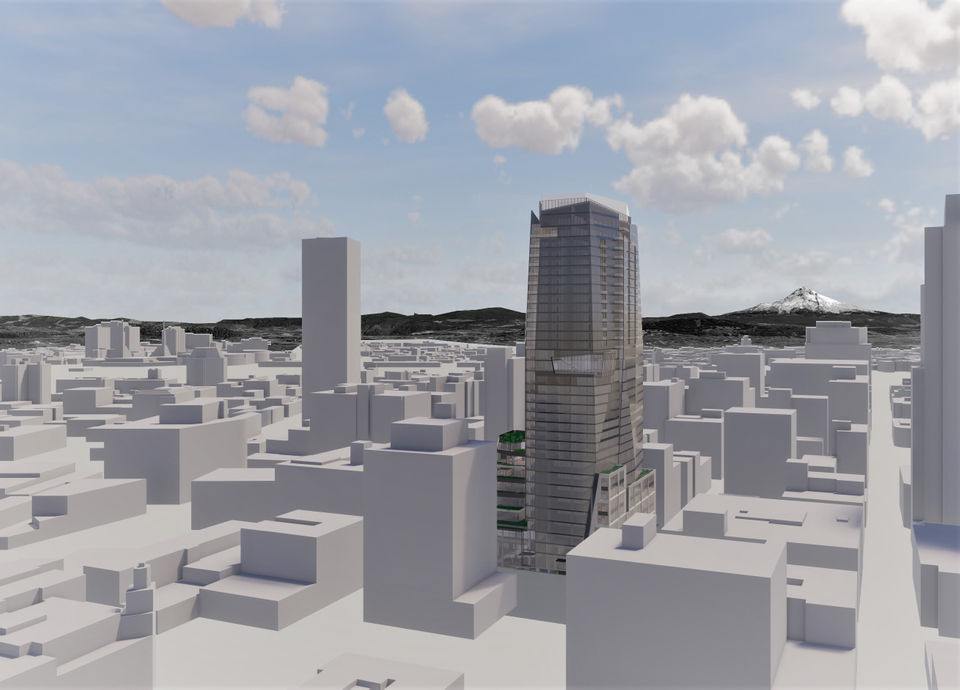 A Portland developer said his company plans to build Portland’s first “five-star” hotel at the site of a popular downtown food cart pod.

Architects for BPM Real Estate Group submitted early plans for a 33-story tower on the downtown site at 936 S.W. Washington St., a site that’s currently a parking lot and the larger half of the Alder Street Food Cart Pod. In addition to the hotel, the tower would include a mix of offices and condominiums and, in a nod to its current use, space for a food hall.

The development proposal was disclosed late last month, but the developer and the specifics of the plan had not previously been identified.

BPM previously developed the Pearl West office tower, completed in 2016 in the Pearl District, and the Broadway Tower, a Radisson “RED” hotel and office building that’s under construction downtown.

“The timing is just right for this project,” Bowen said in an email. “Portland is growing and changing from a town to an international city. The demand for a five-star luxury hotel matched with complimentary commercial and residential tenants in a multi-modal location has never been greater than it is today.”

Hotel star ratings aren’t standardized, but Portland doesn’t have any hotels that would typically be considered five-star, said Marcus Hibdon, a spokesman for Travel Portland. A five-star hotel typically includes a spa, a pool and a fine dining restaurant, among other amenities.

While the city has several luxury four-star hotels, they lack the pool or spa element, he said. Three potential designs for the tower planned at 936 S.W. Washington St. in Portland. (GBD Architects via City of Portland)

The building would be subject to the city’s inclusionary zoning policy, which requires rent-restricted housing as part of any large residential development.

But Bowen said the company intends to pay a fee into an affordable housing fund rather than include the affordable units, an option offered to developers as part of the policy. Bowen said he expects the fee to amount to more than $7.5 million.

The project also includes two floors of event space and three levels of underground parking, with space for 357 cars.

The ground floor includes several retail storefronts, including space for a potential food hall, which Bowen said would be similar to downtown’s Pine Street Market. Scenes from the block between Southwest 10th and 9th Avenues and Southwest Alder and Washington Streets in downtown Portland, which is home to one of the oldest concentrations of food carts in the city. The food cart pod is shown on July 6, 2015. (Randy Rasmussen/Staff/file)

“This project will be a development for the ages and a catalyst for international commerce,” Bowen said. “We believe that the next generation of real estate investors and developers will compare their projects to this one due to its high standards for design, construction, community and elegance.”

The early plans will go before the Portland Design Commission next week for an advisory review. It’s an early step in the development process, and it’s unclear when construction on the high-rise could begin.

The lead architect is GBD Architects of Portland, and the general contractor is expected to be Howard S. Wright Construction. The Goodman family’s Downtown Development Group owns the land where the hotel is proposed.